La Carihuela, in the eastern part of Torremolinos, was a long time ago a traditional fishing village inhabited by people who devoted themselves to the seafarer's life. At the present time only a few picturesque nooks and crannies remain of the old quarter as reminders of the place's former identity. Since some years ago La Carihuela is a cosmopolitan centre in which are concentrated innumerable hotels, leisure and gastronomic establishments. It is precisely the district's gastronomy that has earned this strip of the Torremolinos coast well deserved fame that has spread beyond all borders, and all because of the remarkable "pescaíto" (small fried fish) that is served in restaurants in this area.

While it is true that pescaíto is without a doubt the dish most characteristic of the entire coast of Málaga, and it can be enjoyed anywhere with an assurance of quality, it seems that there is a secret for preparing this product that only the professionals in the kitchens of La Carihuela know. It is with good reason that the manner of preparing the different kinds of fish that are served there is praised above all other methods by the thousands of people per day who patronise the restaurants.

The beach of La Carihuela, 2.1 kilometres long and fully provided with every imaginable services, extends to the Benalmádena Leisure Port. It is accessible along its entire length by way of the pleasant and bustling seafront promenade, which is bordered by the most venerable restaurants and beach bars in the region and by the large number of hotels, now completely renovated, that helped catapult this section of Málaga onto the international stage. 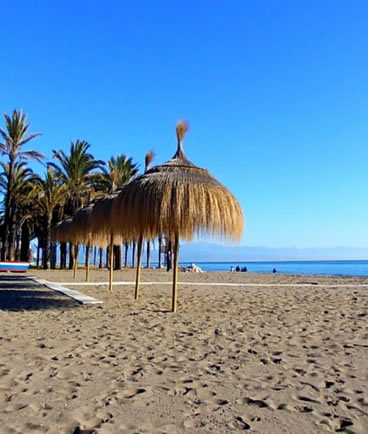